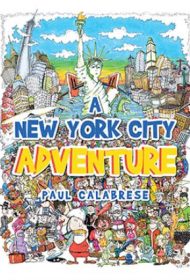 Travel books can be intimidating due to lengthy chapters filled with copious detail —which is what distinguishes Paul Calabrese’s A New York City Adventure. The author-illustrator has visually crafted a short, novel guide for sightseers wanting to visit the major attractions around NYC.

Calabrese’s debut contains 10 locales likely to be of interest to tourists heading to the “Big Apple,” such as Rockefeller Center, The Bronx Zoo, South Street Seaport and Central Park. Information on each locale is featured on a left-hand page, with a lively cartoon depiction of the site and its crowd of visitors on the opposite page.

Calabrese’s causal tone makes the text easy to follow—a definite bonus for families traveling with children or for visitors who learned English as a secondary language. And although many of the facts offered are easily accessible via innumerable other sources, more obscure information, such as “with 472 stations in current operation, the New York City subway station is the largest in the world”; and “advertising on these LED displays (in Times Square) can cost over 4 million dollars a year” proves entertaining.

In contrast, the dining establishments referenced throughout may underwhelm those looking to uncover culinary gems in a city known for its restaurants. Less than five eateries are referenced, one being the national franchise Nathan’s Famous Hot Dogs.

And while Calabrese’s visuals are vibrant and amusing, some of the caricatures included in the crowded montages could be perceived as culturally insensitive due to the exaggeration of stereotypical physical characteristics of people of color. Subsequent editions would be improved by those images being modified, as well as the addition of some “off the beaten path” spots known mostly to New Yorkers.

With its limited number of locales, this guidebook isn’t meant for serious sightseers. However, it wouldn’t be surprising to find Calabrese’s travelogue available for purchase in novelty gift shops as a colorful memento of one’s inaugural trip to the City That Never Sleeps.