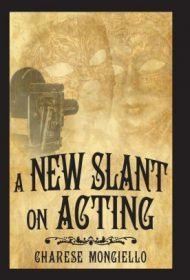 Charese Mongiello has held many jobs in Hollywood, including producer, director, actor, script supervisor, and second assistant director. In A New Slant on Acting, she leaves the how-to of acting to teachers who specialize in these skills, focusing instead on helping newbies understand how Hollywood ticks from the ground up

Mongiello arrived in Hollywood with the same acting aspirations as legions of others—-accumulating the same debt and disappointments along the way. But she survived by realizing that more important than connections (“who you know”) is the ability to make other people’s jobs easier. She became the penultimate team player, learning all the steps required to make a film and understanding the roles of those integral to the task.

Here, she offers readers details of that specialized knowledge: from how to read a call sheet, analyze camera angles, and decipher a script to knowing what various film crew members do, including grips, assistant camera operators and more. The book provides an interesting blend of technical information (like film editing jargon), Hollywood insider advice (“Don’t push the director and be overly needy”) and pep talk (“Keep your eye on the target”).

With the proliferation of digital platforms hungry for content, Mongiello argues that job-seekers with an entrepreneurial spirit can land plenty of work if they are willing to learn the trade and remain open-minded about how the arc of their careers should unfold.

Oddly, the author is silent about sexual harassment and gender-based salary disparities, as highlighted with the #MeToo movement. Her chapter titled “Money” neglects these topics, leaving one wondering whether she has simply never encountered these issues or doesn’t want to address them. Additionally, the narrative suffers from disjointed writing at times, although this is more a distraction than a huge impediment to comprehension.

Such flaws aside, this book should give jobseekers enough knowledge to lend them confidence—the trait Mongiello says is ultimately more marketable than pearly white teeth or celebrity connections.