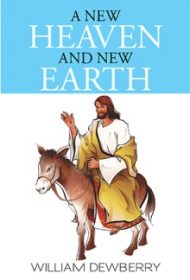 In A New Heaven and a New Earth, William Dewberry presents a work of Christian salvation history, an attempt to chronicle the relationship between a redemptive God and the trials and tribulations of human beings. To quote the author: “This book gives an overview of the history of God’s creation from the beginning of time to the end of time and explains God’s plan to reward everyone that believes in God the Creator and is faithful to obey the gospel message of His Son Jesus Christ.”

Dewberry’s exegesis of the biblical story is faithful and fast-moving. He opens with a short overview of the Old Testament and quickly moves on to the New Testament, offering summaries and brief commentary on the miracles of Jesus, his parables, and his death and resurrection. He also casts an eye on the Acts of the Apostles, which details the lives of such early martyrs and saints as Stephen and Paul. The last third of the book, where Dewberry shines brightest, seeks to unpack the symbols and secrets of the enigmatic book of Revelation.

In his execution, however, Dewberry isn’t as successful. Unfortunately, the book contains a plethora of punctuation errors (missing commas and periods, odd use of the hyphen, etc.); grammatical problems that result in convoluted sentences (“When he had taken the scroll, the four living creatures and the twenty-four elders fell down before the Lamb, each having a harp…”); and repetitions (“Satan called the Devil,” followed shortly with “Satan is called the Devil”). Moreover, the text contains factual errors (the Hebrew word for spirit is misidentified as “pneuma” when in fact it’s the word ר֫וּחַ or “ruach”).

All in all, Dewberry’s book is a solid effort that demonstrates his devotion to his faith, but it needs serious editing before it can reach a wide readership.