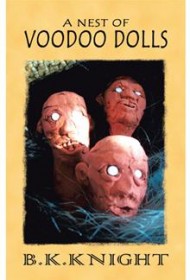 Set in South Africa, this crime fiction explores the personal and professional life of hard-drinking Botswana police sergeant, Duski Locha. While investigating ritual serial killings in which male genitals have been removed from victims’ bodies, Duski faces a painful breakup with her cheating boyfriend and a scandalous flirtation with a handsome white man from Scotland.

To resolve her emotional turmoil, Duski consults a witch doctor. She believes — based on her strict religious upbringing — she will be punished for this action. Shortly afterward, her former boyfriend (sans genitals) and his pregnant new girlfriend wind up dead. Having recently caused a scene by throwing a well-aimed bottle at her ex’s head, Duski becomes the prime suspect in the murder. This trauma necessitates another visit to the witch doctor for advice about her love life, the mutilation crimes, and spirits that haunt her.

The author is a former police sergeant from Botswana. Her father was a preacher vehemently opposed to traditional healers (a.k.a witch doctors). Familiarity with the subject matter lends credibility, but it doesn’t quite overcome some stylistic weaknesses. “Sergeant Duski Locha,” for instance, is reintroduced several times in the narration by her full name and title as if readers had forgotten her from one page to the next. The author has a penchant for having an angry character “suck her teeth,” a tiresome phrase that appears repeatedly. The typos are distracting, as is the unfamiliar African and British slang that appears frequently, usually without explanation.

Many readers will likely be scared off by the gruesome nature of the crimes and the explicit sexual discussions included in the story. Others may become frustrated by the stylistic obstacles. But lovers of unusual crime fiction will find plenty of dark magic in these pages, which may be enough to satisfy some.