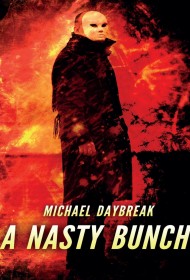 This well-meant novella about a young teacher struggling through his rookie year at a tough Richmond, Virginia, elementary school is fueled by Christian faith and deploys familiar tropes about hard work, perseverance and redemption. “I might as well have been training zoo animals,” Paul Woodson says of the loud, unruly first-graders in his care. Not to worry. “The Lord delivers a righteous man from all his troubles,” Paul’s virtuous wife Karen assures him. Readers get the idea that the shell-shocked teacher will learn his own lessons and prevail in the end.

Yes, but not before author Michael J. Davis diverts his protagonist into kidnappings, vigilantism, amnesia supposedly induced by psychotherapy and a run of bloody vengeance that strains belief. A Nasty Bunch features two serial killers, one of whom is completely tangential to the story’s convoluted plot. In addition, its young teacher acts in incredulous ways: When his beloved wife is abducted, he goes right on worrying about his shaky job security and manages to get “comfortable on the couch in my pajamas” for a night of TV.

Aside from its psychological and character development missteps, A Nasty Bunch features a plethora of issues with grammar and writing mechanics. A man “ran his fingers through his hands”; a “cellphone rung”; and Paul’s rebellious first-graders are transformed from “a nasty bunch” into “ a little bit more delicious.” At least five minor characters are all described as “chubby.”

It’s a pity the author didn’t confine himself to the story of a teacher finding his way. The horror-tale theatrics he forces into these pages only confuse it. Propelled into the role of crime-stopper when his wife and a son of the school’s principal vanish, clueless Paul finally sees something like the light: Concentrate on teaching, he tells himself, and leave the detective work “in the hands of the Lord and the police.”

That’s sound advice for both Paul Woodson and for Davis.