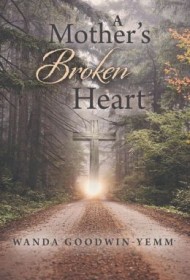 Anyone growing up in an abusive home can likely relate to the desire to build a better life for the next generation. In the memoir A Mother’s Broken Heart, one such woman’s wishes go awry as her sons grow up and away from her intentions for them.

Author Wanda Goodwin-Yemm describes growing up on a cotton farm in Fulton, Mississippi, with a gaggle of siblings, a loving mother and an abusive, alcoholic tyrant of a father. Devoted to little besides his moonshine still, he beat his wife often and was so disliked that on the day he dropped from a heart attack, the first person she asked for help refused to drive him to the hospital. Free of his rage after his death, the family thrived for a while, forming a touring gospel band and traveling the country by bus to perform.

Goodwin-Yemm was married at 13. When she and her husband divorced, she devoted herself to her two sons, then was saddened when her older son chose driving a truck over attending college and her younger son became a drug addict.

A Mother’s Broken Heart is written in a conversational style: “After all the things that I told you about my first son, I think it’s time to move on to my second son.” The writing is clear and simple, but occasionally disorganized: A story about the elder son trying out for a pro football team, for example, is convoluted and raises more questions than it answers. Goodwin-Yemm blames several people for her younger son’s drug problems rather than demanding accountability from him, a noble impulse but one that undermines her credibility.

Despite the story’s shortfalls — and the fact that it is an often-harrowing tale — this is an interesting slice of life that may offer consolation to someone in similar straits.