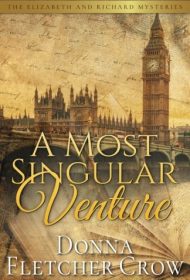 Jane Austen’s fine sense of irony would be amused at the perpetual interest in her life; readers can’t seem to get enough of Austen-inspired tales. Here, Donna Fletcher Crow offers a cozy contemporary British mystery that should satisfy those eager for ever-more glimpses into Jane’s life and times.

Crow’s latest in her popular Elizabeth and Richard literary suspense series finds the two Spencers, both English professors, at the University of London for the summer.  Richard is teaching a Queens of Crime seminar focusing on Austen and others, while Elizabeth, using Austen’s letters, is researching the London the author would have known.

Also in London is Richard’s brother Andrew, the head of a publishing company bidding for a first edition Austen book. The first edition, worth nearly a million dollars, lures a sophisticated group of forgers and criminals, some using Richard’s seminar for a cover and inside information.

As Elizabeth and Richard become increasingly suspicious of seeming accidental deaths of individuals connected with the auction, a subplot involves Babs, a loud, loquacious American who initiates an unlikely alliance with a UCLA student working as an intern in a London rare bookstore. When the nimble intern inexplicably plummets down some cathedral steps near Babs, Elizabeth begins to question Babs’ purpose. Meanwhile, 11-year-old Jack, a summer ward of the Spencers, also plays a role.

Crow’s forays into the particulars of Richard’s classes are so detailed readers almost feel compelled to take notes, and Elizabeth’s street research takes on the tone of a tour guide. While true Janeites may revel in the information, this slows the plot’s pace and may deter less devoted readers. Young Jack also seems too smart and knowledgeable for an 11 year old.

However, Crow moves confidently toward her nail-biting climax, which reveals unlikely villains and heroes. And as the story unwinds, many will appreciate the view of an England blissfully untouched by Brexit and the novel’s insights into the valuable business of rare books.