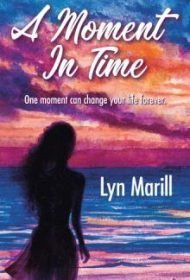 A Moment in Time is a love story set in a dual timeline, as Micaela Lewiski, now in her late 40s, revisits the story of lost teenage love that has haunted her since she was 19 years old.

Micaela is a retired actress, mother and grandmother whose life is turned upside down with a cancer diagnosis. Reluctant to undergo traditional treatment, Micaela finds her dreams tormented by memories of her life as a teenager in Florida. This back story becomes the novel’s central narrative, as Micaela re-lives meeting and falling in love with Connor McKenzie. From the prologue, the reader knows this love did not last. What went wrong for Michaela and Connor?

The teenage chapters of A Moment in Time are engaging. Micaela struggles to trust Connor: he’s a few years older than she is, more experienced and perhaps keeping secrets from her. The 1980’s are well evoked and the couple have a diverse group of friends. A strength of both main characters is their open-minded approach to everyone, whether they are black or white, gay or straight, or, as in the case of Connor’s younger brother Ricky, have learning disabilities.

The modern-day storyline is less well developed. Although surprising revelations about the past ultimately explain some of Micaela’s actions, her interactions with her daughter and her old friends feel forced, and the dialogue is often stilted. Her cancer diagnosis, front and central at the book’s opening, fades out of the story, and a closing epilogue leaves unanswered questions.

Readers will root for Micaela and want to know what happened to her and Connor. But the story veers from sentimental and predictable, with even Micaela comparing what happens to a soap opera, to outlandish and hard to believe. The reveal of what has happened to Connor, and in consequence to Micaela, falls into the latter category.

In sum, while it offers some rewards, the story’s lack of cohesion and other issues ultimately prove frustrating.