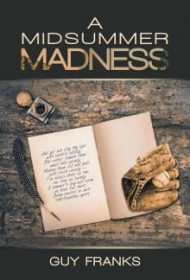 The story follows the ballplayers and their associates—several overtly inspired by characters from Shakespeare’s plays—as they battle for glory, led by their Bard-of-Avon-quoting manager, Shakespeare “Shake” Glover. It all leads to a climactic series of games for a championship, like most good baseball stories, while also providing twists involving deception, paternity and even gender swapping—like many good Shakespearean tales.

The narrative offers numerous nuanced and explicit references to the Bard, as in this monologue from Shake: “A game of baseball is identical to a Shakespearean play, like A Midsummer Night’s Dream. It has a beginning, middle and end and is filled with surprises and twists of fate. It can be a comedy of errors or a tragedy like Julius Caesar where you get a knife in the back in the bottom of the ninth.”

Similarly, when you see a character named “Dane Hamilton” pop up, you’d be shocked if he didn’t end up having a chat with his father’s ghost.

Franks has structural fun by formatting many dialogue-heavy scenes as if the dialogue were appearing in a theater script, although most conversation is conventionally formatted.

This is a spritely read with some nice touches of humor, such as when a crusty equipment manager misinterprets the words “CD (compact disc) compilations” as “seedy copulations.” However, dialogue is often used to convey background information, and, thus, can seem unnatural; for example, when Shake reminds one of his players: “Three years ago you were the youngest rookie in the majors…. Now you’re in Double-A and going the wrong way.”

Despite this, the story delivers many rewards. For readers with an interest in both baseball and the Bard, A Midsummer’s Madness delivers a solid base hit, if not necessarily a Grand Slam.