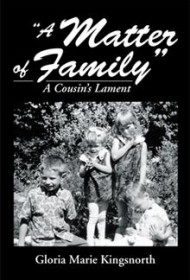 Gloria Marie Kingsnorth, the author’s pen name, writes about her Canadian family and a cousin conceived through statutory rape and adopted as a baby. A famous billionaire entrepreneur, the cousin never acknowledged his paternal lineage. Written as a letter to him, Kingsnorth’s tale relies heavily on family lore, tabloid gossip and her own assumptions. She fictionalized names and personal details throughout, fearing the reprisal of her wealthy, powerful cousin.

She begins with her family history, which includes several male relatives who abused their families and committed child molestation and incest. She tells of her mother’s brother, who at 15 raped a neighbor. The baby was whisked away to America for adoption by a wealthy family. As a young man, her cousin sought out his birth father, who, Kingsnorth says, helped launch his son’s success. The rest of her family remained unaware of the cousin’s identity.

This 651-page tome is hard to wade through. The first half focuses on Kingsnorth’s family, an unrelenting account of mental illness, abuse and deceit. She exhaustively lists her many relatives’ personal and financial problems, writing that her “filthy rich” cousin never attempted to help his biological family.

The second half is equally plodding, detailing sightings over the years of the cousin, his wife, and his “wicked entourage,” whom Kingsnorth accuses of stalking, spying on and slandering her and her relatives. She writes that in late 2004, she and her aunt flew to Las Vegas. “I thought it was very strange how practically everyone stood up from their slot machines and gawked as we came down the escalator. Were they expecting you, [Cousin] Grant? Were you on the plane, sitting farther behind us in coach?”

Throughout, she consults psychics, television talk shows, gossip magazines, and tabloids, making her claims sound less than credible and not a little paranoid. Ultimately, Kingsnorth gives too much detail that is too unbelievable to make for a satisfying read.

Also available as in hardcover.