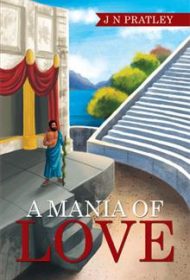 Author J N Pratley’s book, A Mania of Love, is a complex novella narrated by one Clarence Nelson, an American classics professor whose head is stuffed full of Plato’s Republic, Greek mythology and some dark quirks.

On sabbatical, Clarence goes to the idyllic Greek island of Hydra to write a novella of his own called Archie, a modern take on the life of the licentious poet Archilochus of Paros, who’s been dead for 2,700 years. “Our fantasy lives commingle with our conscious ones in a sometimes indistinguishable fashion,” Clarence tells us, “as if we are two different persons fighting for supremacy.” Pratley, a Grecophile romanticist, parlays that notion into a kind of philosophical melodrama in debt to hardboiled American crime fiction as well as Aristophanes and Sophocles. It’s a captivating mix.

Enthralled by parallels and symmetries, Pratley launches his fiction on two tracks. Clarence’s novella-within-the-novella follows an American-educated, ascot-wearing Greek playboy named Archie Levandiaditis as he romances the bikini-clad tourist girls on Paros before entering a fateful relationship with a devious, beautiful American painter named Liatrice. Meanwhile, Clarence the diarist chronicles, in alternating chapters, his own fling on Hydra with a shady French restaurant waitress called Lena. Naturally, both men’s narratives mimic the drama of Archilochus, who drove his own wayward femme fatale, Neobule, to suicide.

Pratley’s split-level house of fictions is a bit over-decorated, and his quest to make Greek classicism relevant today sometimes feels forced: One more contemporary séance with the dead poet’s ghost, or with the ancient physician Asklepios, and the reader might cry out: Enough, already!

But Pratley is a nimble and witty writer. Witness Clarence’s confusion of myth and reality when he becomes disillusioned with his island affair: “I know now how Orestes must have felt with the screwups with Clytemnestra . . .Lena was becoming a giant booby trap.”  For patient readers with a taste for Greek history and culture, this clever, richly layered tale has rewards.