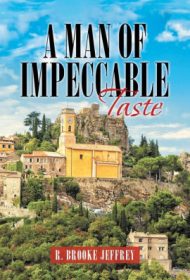 The year is 1957, and Paris detective Charles Maillot is ordered to abandon his Lyon vacation to investigate the crucifixion of a beloved figure in Toulouse in the south of France. The local investigator has a conflict of interest with the archbishop at whose home the dead man was found. Maillot’s first purpose is to clear the archbishop of any wrongdoing.

Leaving Lyon is no small thing, since Maillot travels there each February to dine at the city’s best restaurants. He chronicles and compares their delights later with an emphasis on sussing out the cuisine’s links to history.

As the story evolves, Maillot is drawn to the past of a local children’s hospital where the well-liked victim was once a patient and later a caretaker.

Maillot, not the crime, is the star here. As narrator, Maillot is a sophisticated, erudite raconteur, having descended from minor royalty and served in the military for two countries. He is also a former prisoner of war (captured by the Germans) and holds a high-prestige law degree. He says he developed detachment and objectivity while attending an English boarding school, which led him to his career.

The writing is elegant (i.e., “I kept seeing Francoise’s blue eyes and her luxurious black hair with streaks of gray pulled back from a face that would have turned Botticelli’s head.”) Still, one wishes the narrator would share more thoughts on the investigation’s progress. Traditional mysteries remind readers occasionally of a character’s significance to the story. Here, characters can get obscured among Maillot’s memories of a lost colleague, the arduous process of baking bread in Lyon, and how Beaujolais came to be.

Most readers will easily forgive this flaw. Although a slim volume, the book incorporates the Nazis’ theft of great art, child sexual abuse, local corruption, and a love story, all leading to the entirely satisfying conclusion.