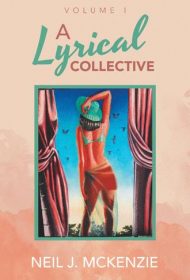 The poems that comprise Neil McKenzie’s Lyrical Collective are broad in scope, touching on everything from relationships and love to Native American lore and slavery.

The slim book consists of 85 true- and slant-rhymed poems. It starts with a sequence of narrative poems recounting Native American lore, then turns to the history of American slavery, with poems like “Harriet Tubman” and “Frederick Douglas [sic].” The work that follows includes: poems exploring Eastern philosophy; work about love and family relationships, and finally poems reflecting on the modern cultural moments, epitomized by “Never Forget ‘September 11th’” and “Ukraine.”

These poems are raw and expository, not yet crafted or proofread (there are significant typographical errors throughout) with an audience in mind. They “tell” rather than “show,” preach rather than explore, as in: “You all look, but you don’t see/ We all bare [sic] the fruit from the same sacred tree”; “Trust, respect and honesty/ This is what love really means to me”; and “Public burnings, rapes, and decaputations [sic]…/ This was a madmans [sic] version of a psychotic nation.”

Such lines lack images to engage readers’ senses. Additionally, the speaker’s ethos is consistently opinionated and emphatic, and he relies on sweeping generalizations and abstract language rather than specific examples and sensory details that would forge a connection with readers.

Overall, the work lacks artful diction, emotional nuance, and a clear focus. The poems stay at surface level, as epitomized by “The Noble Truths”: “The Noble Truths they will set you free/ Its [sic] the Ideology of life how it should be.” The poem references “basic goals for any Buddhist” without presenting those goals.

McKenzie’s poetry would be improved by focusing on a few people, places, and things, rather covering so much historical and contemporary ground in one project. As is, these poems will likely appeal to the author’s family and friends, rather than serious readers of contemporary poetry.