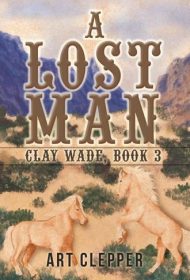 A Lost Man, the third installment in Art Clepper’s Clay Wade trilogy, is an Old West tale set in the lawless lands between Colorado and Texas.

The novel takes Wade across much of the Southwest following his service as a captain for the Union Army in the Civil War. (Readers learn late in the book that Wade was reported killed in action in the War. After a long convalescence, he returned to find his home and land sold for back taxes and his valuable herds of cattle and horses stolen by the new owners of his property).

Living by his own code of ethics, Wade helps an Indian maiden, pursues bank robbers, stops a lynching, defeats cattle rustlers, is accused of being a horse thief, finds the woman of his dreams, kills a passel of bad guys, and thwarts several attempts on his life, while consuming copious amounts of coffee and jerky. If these episodes sound like clichés, they are. But it’s this type of action—reminiscent of popular 1950s and ‘60s TV shows like Bonanza, Have Gun Will Travel and The Rifleman—that makes reading a Western novel fun.

A Lost Man isn’t perfect. The author occasionally mixes present and past tenses: “His eyes were sweeping from side to side searching for the others. They were somewhere, but he hasn’t seen them yet.” And the narrative contains errors in spelling (e.g., “to” for “too”) and punctuation.

Also, while A Lost Man is entertaining in its own right, readers of its two predecessors, Long Trail to Texas and Revenge Texas Style, will likely enjoy it more than the uninitiated, who know nothing of the protagonist’s past until well into the book.

Nonetheless, Clepper spins a good yarn, and it’s easy to overlook a few errors in favor of losing oneself in Clay Wade’s tragedies, romantic adventures and heroic exploits all in the stereotypical atmosphere of the Old West.