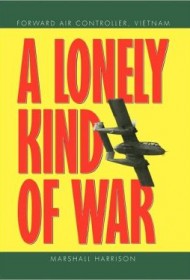 When Marshall Harrison joined the United States Air Force, he knew he would probably fly missions in Vietnam. What he did not anticipate: his designation as a forward air controller during combat in North and South Vietnam, Laos and Cambodia between 1965 and 1970.

After piloting high-speed jets at high altitudes while in the military, Harrison had to adjust to low-speed, low-flying aircraft meant to scout enemy positions, then direct bombers to the scene while simultaneously verifying that U.S. troops on the ground in heavily forested locales would escape the devastation from the bombs. Harrison terms the task “a near-impossible proposition,” yet he carried it out successfully over and over. Toward the end of the book, he relates being shot down. He survived on the ground overnight until a U.S. Army helicopter crew carried out a rescue mission.

Forward air controllers suffered high death rates, and often died alone in enemy territory. Harrison captures the dangers with verve and offbeat humor. Unlike so many other combatants who feel compelled to recount the daring nature of their missions, he is self-deprecating and an excellent wordsmith. Born in 1933, the author was no kid pilot; his relative maturity shines throughout the narrative.

One caveat: portions of the book–especially, unfortunately, the opening section–are so jargon packed that non-pilots might find complete understanding arduous, even with help from the glossary well placed at the opening of the book. But after that first section set in Vietnam’s Binh Duong Province, the jargon-filled passages diminish and the narrative becomes downright involving.

(Note: Harrison died in 1995; his widow submitted the book for review. Before his death, Harrison published three novels set during the Vietnam War and earned a master’s degree in education from Texas Tech University.)