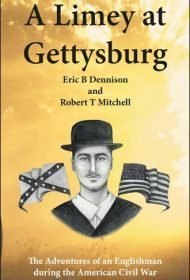 A Limey at Gettysburg is a compelling historical novel about a British journalist sent to America to cover the just-begun Civil War.

Firth Brown, writing for a Manchester newspaper, finds himself traveling across the Atlantic to Washington shortly after shots are fired at Fort Sumter. While reporting on the conflict, he falls for an American woman and becomes involved in a dangerous business venture. Later, through misadventure, he spends years in the South, starting a new life under a different identity and with a new love.

Authors Eric B. Dennison and Robert T. Mitchell have done their research, delivering rich details of American life during this time. Firth’s sea voyage feels awful in his cramped, third-class quarters, with poor food and seasickness. The battlefield hospitals are shown in all their gruesomeness, with amputated limbs and the pained groans of soldiers, but also the heroic work of the doctors and nurses to save them. Firth’s wife even mistakenly visits an abortion doctor’s facility and learns about pregnancy-preventing potions.

While the battles are described in plentiful detail, especially military tactics, Firth gets most of his accounts from a drinking buddy with government and military contacts. As such, they feel somewhat removed, as if reading a history book. Also, there’s no mention or depiction of slavery, even in Firth’s time in the South. This seems like a strange omission.

Still, the novel has plenty of action, with shady deals involving violence, as well as attempted rapes and assassinations. Firth handles himself well, dodging bullets and fists and responding in kind. He is also clever, disguising himself as a Union officer at one point, and in another turning the tables on a business endeavor to benefit himself. He begins as a relative innocent, but America seasons him in unexpected ways.

With a driving plot. full of drama and romance, and an intriguing protagonist, the book will appeal to historical fiction fans and those simply seeking a compelling story.