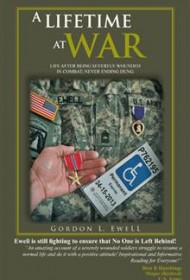 Master Sergeant Gordon L. Ewell was a combat engineer in Iraq whose job was to disarm improvised explosive devices. While performing those duties, he writes, he was blown up six times. The last explosion nearly killed him. Ewell suffered a traumatic brain injury, profound hearing loss, a broken neck, damaged vertebrae, respiratory problems, a broken jaw and shattered teeth and experienced tremors, seizures and abnormal body movements. He lost one eye and has been classified as legally blind; his bladder is no longer functional, and he has been diagnosed with Post-Traumatic Stress Disorder.

And yet, he has pressed on, not only for his own sake, but for others who have been similarly injured.

A Lifetime At War begins with Ewell’s accounts of his injuries and how he copes with daily tasks, such as emptying his bladder every morning. But he soon shifts gears, putting the focus on others. And this is what makes this book something special.

A Lifetime At War is almost a handbook for those who served and were injured. It tells how to recognize and deal with depression and PTSD, for example. It explains the need for a hobby. It shows where help and support can be obtained. The book also offers dozens of what Ewell calls “Gordy-isms,” bits of philosophy and humor that are at turns thoughtful, funny and entertaining.

All will be amazed by Ewell, whose story is not just one of coping and surviving, but of excelling. Despite his limitations, Ewell has become a writer (his first book, Dung In My Foxhole, came out in 2011), motivational speaker and hospital volunteer. He is an inspiration, and his book is a worthy resource for the injured, their families and even those Americans who have been largely divorced from these far-off wars, who can learn much about what these returning soldiers experience.