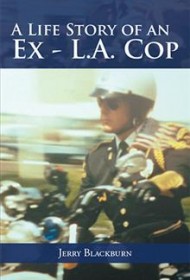 Jerry Blackburn spent nearly 50 years in constant motion, first as a child whose father chased Depression-era jobs and then as an adult who cycled through dozens more jobs and towns, once even changing wives. In A Life Story of an Ex-L.A. Cop, readers find him at 85, grounded by macular degeneration and battling severe depression after the death of his wife. “I had nothing to look forward to,” he writes, “other than meeting God and my wife Deli in heaven.”

Suicidal and nearly blind, Blackburn found salvation in writing a memoir, dictating one story at a time to his Filipino caretaker. The resulting book is a bittersweet accomplishment, grammatically rough and superficial in spots but hinting at a story that holds promise if told more fully and with more careful organization. Many chapters read like the recitation of random memories, often in no particular order. Parts about his days as a motorcycle cop resemble police reports, just the facts told without emotion.

Blackburn hits his stride with passages of a more personal nature, however, such as describing the Wyoming dude ranch where he met his first wife, the joy of eating elk at the end of a cattle drive and the two drivers he pulled over who touched his heart and were let off without a ticket. Such moments offer glimpses of what the book could be, with revision.

At the book’s conclusion, the reader is left feeling compassion for the author and his wife Deli, who helped him create a safe haven at Lake Arrowhead until dying from cancer. She provides nice balance to Blackburn’s sorrowful, simple tale of an unwanted son whose childhood pain remains at the end of a long, tumultuous life.