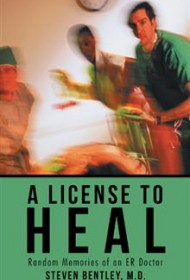 As the divisive debate over health care continues, Dr. Steven Bentley offers an insider’s voice on what really goes on in overburdened emergency rooms. A 30-year veteran of emergency medicine, his view is often disconcerting as he chronicles the joy of saving and the despair of losing lives – sometimes from bad decisions and bureaucracy.

Bentley is upfront that he quit medicine because he finds it too corporate and money-driven. That certainly colors his perspective, and at times his frustration comes through as sanctimonious. The more fascinating glimpse is his confession that the white-coated saviors often grapple with self-doubt. “It feels like I spent so much time being afraid. I was always afraid that things would not turn out well or that I did not know enough,” he notes.

He also writes of his own mixed emotions on quality of life. His jubilance from saving a young man’s life after a terrible car accident shifts to unease as the same young man tries multiple times to commit suicide because his neurological injuries have become a burden on those around him.

Bentley has packed a lot of stories into 128 pages, many horrific: the 3-year-old who died from burns suffered after being left alone and trying to light a fire to keep his siblings warm. Some deeply unsettling: the 14-year-old girl pregnant for the second time by her grandfather. And still others bittersweet: the elderly man who finds peace right before death as he sees angels waiting to greet him.

Yet the sheer volume of the anecdotes is also the book’s most unfortunate flaw. The author’s conversational writing style offers no real narrative arc. While the raw material is there, the memoir feels like a recitation of one patient story after another. Although these can be interesting taken singly, without a larger, cohering message the book’s greater potential feels squandered. Those who can overlook this flaw may enjoy Bentley’s stories, but many will feel largely unsatisfied.