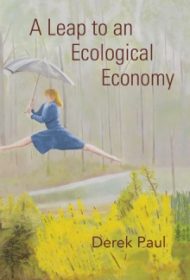 Scientist Derek Paul introduces readers to a new economic concept designed to prioritize the health of all life on Earth.

Paul explains that the current system “is one that authorizes enterprises to pursue profit making without any built-in regard for resources.”  This blatant disregard for resources has resulted in grave threats, such as climate change, global war, “and collapse of individual national economies.”  Paul’s proposed economy, he notes, features, at its core, “the need to respect the Earth and sustain all of life in its fullness of diversity.”

Using a series of concise chapters, Paul details how his proposed economy will address: reversing the trajectory of climate change, creating 100% employment for those who seek it, controlling population to maintain a sustainable balance, reducing inequalities, and more.

Intriguing and informative, Paul’s book delivers well-organized chapters that are mostly accessible. The sections on banking and investment may be murky for readers not already familiar with the concepts, but Paul offers additional resources for further reading that may shed more light—and the effort to wade through such passages is rewarded with an insightful glimpse of an inspiring concept. The author’s placement of notes at the end of chapters is handy, and his Appendices enhance the content.

Paul concludes the main part of his book with recommendations. While they’re logical, they lack specifics that reassure readers this economy is achievable; for example, his first general recommendation is that the “United Nations Economic and Social Council prepare a Declaration to be signed by all UN member nations.”  Given current events, this seems dubious. The need for countries to agree on many elements of this plan, such as terms they require of businesses, is a wonderful, lofty goal, but one that requires additional explanation as to how it can happen.

Even without more detail, however, A Leap to an Ecological Economy sparks some motivating ideas. It will provide much food for thought for readers interested in the topic.