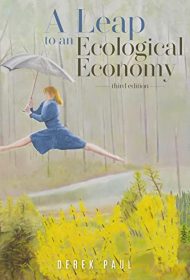 “Climate change,” states Derek Paul in his third edition of A Leap into an Ecological Economy, “is the greatest threat to life in general and the human race in particular…” With this edition, he hopes to promote a new paradigm that “recognizes the interdependence of species” and “requires respect for life.”

Paul notes that “a few governments are still subsidizing the operations of petroleum industries, and the most militarily powerful governments in the world are competing in raw material exploration in the Arctic….” Meanwhile, increasingly citizens are “demanding action to address climate change.

The author’s new paradigm would require an approach to economics where wealth is perceived not as the accumulation of money, but rather assessed “in terms of resources: natural, built and human capital.” Banks, in this new model, would ideally be owned by the people, and no-¬interest loans would be given to projects promoting human and natural well-being. This ecological economy would “ensure that the use of resources does not impair future prosperity,” and the use of nonrenewable resources would “be preserved through minimizing extraction and maximizing recycling.”

Paul sees most ecological issues as interrelated, and his handbook-like approach is impressively comprehensive. In chapters with headings like “Defining and Restoring the Commons” and “The Thorny Problem of Population,” he covers topics ranging from the deregulation of banks, to deforestation, to the “threat of population contraction by starvation.” Each section is followed by references so that readers can do their own research.

This strength is also a weakness, however, because the author too often requires readers to look elsewhere for a more complete picture. For instance, concerning “Industrial Production,” he points readers to Annie Leonard’s The Story of Stuff, for information on this “extensive and complex” topic, rather than untangling it himself.

Though not all-inclusive, Paul’s book represents a substantial contribution to the literature that would rescue us from global warming. It should be a welcome addition to any concerned person’s library.