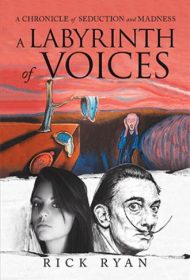 Rick Ryan’s new novel, set from the fall of 1979 to the summer of 1980, follows a man losing his grip on reality via a cult-like self-improvement program, drugs and alcohol, and an enigmatic woman.

When Mike Ridley’s friend introduces him to LifeAware, a series of personal development seminars promising a fast track to self-actualization, Mike is skeptical. He quickly becomes a true believer, however, convinced he can bend reality to his will—and grows increasingly unstable, eventually living in a house with no bathroom, drinking heavily and urinating into jars.

Things get even stranger when a friend of a friend calls. Her name is Lacy, but she prefers “Genesta,” a name given her by her former lover, artist Salvador Dali. She summons Mike to her home, where she gives him a painting made from her menstrual blood, and they engage in kinky lovemaking. Mike’s relationship with Genesta is beneficial at first, but soon he sinks back into alcoholism and madness, until receiving an unlikely shot at redemption.

Ryan’s free-wheeling, no-holds-barred style recalls that of Charles Bukowski (who appears in the novel) and Hunter S. Thompson. The technique is effective in showing a mind devolving into chaos and can be funny, as when Mike says he’s about to “be the recipient of undoubtedly the strangest, most surreal sexual encounter of my life . . . or else become the victim of one of the most elaborate, mind-fucking pranks ever perpetrated.”

More often, though, style obstructs rather than enhances the narrative. The plot sometimes jumps abruptly back in time, disorienting readers. Critical plot points are often buried in long, fever-pitched paragraphs. The overall theme also feels unfocused. It’s unclear whether it’s meant to be a shaggy-dog chronicle of being down and out, a serious examination of mental illness, or a twisted love story.

A Labyrinth of Voices contains intriguing plot elements and bursts of impressive stylistic flair. However, both plot and writing need refining to engage a wide audience.