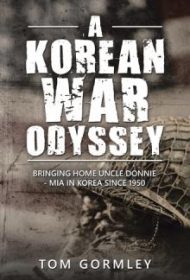 This memoir recounts a couple’s successful six-year mission to learn the fate of Donnie Matney, MIA in the Korean War.

In 1949, 16-year-old Donnie enlisted in the Army with his mother’s reluctant permission. It was peacetime, and she thought he would be safe at his post in Japan. But by the time she received his letter saying he was shipping out to fight in the Korean “police action,” the Army had already sent her a telegram saying that he was missing in action. Six decades later, the author and his wife – Donnie’s niece – decided to learn once and for all what happened, and to bring Donnie home to Missouri.

The first half of the book is set in 1950, when North Korean “bandits” attack the South and President Truman sends Americans into the fray. Very quickly, Donnie’s Howe Company suffers horrific casualties, and he’s one of the missing. American forces are nearly driven off the peninsula until they launch a brilliant counterattack at Inchon.

The author successfully paints the big picture while detailing aspects of everyday Korean life, such as the custom of giving a goose as a wedding present because geese mate for life. Later, he describes his endless correspondence with the American government and the trips he and his wife make to Korea. Ultimately, the remains of several MIA soldiers undergo close examination, and Donnie is identified and finally sent home.

With compassion and insight, this book offers a personal perspective on the “Forgotten War” that took 36,000 American lives. The (understandably) inconsistent quality of illustrations and the sometimes-awkward translation of Korean phrases can be distracting (it would be better to simply use the translation “dog soup,” instead of writing “bosintang (dog soup)” every time the word appears, sometimes twice on one page). A few other copyediting issues require attention.

Nonetheless, this book is recommended for anyone seeking to learn more about the Korean War and the sacrifices made by so many.