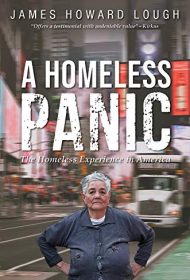 Many know the homeless in this country only as a statistic. In his memoir, author James Howard Lough adds a human face to the cold figures by recounting his time on the streets in Boston.

Lough’s decline into homelessness is relatively painless initially. He has a car which, until it breaks down, provides emergency (though cramped) shelter, the weather is still mild, and best of all, a friend in a nearby suburb allows him to camp in the backyard, provides a tent and feeds him. But the refuge doesn’t last, and he must choose between the streets or a homeless shelter.

Picking the latter, Lough enters a shadow world where he must follow restrictive regulations or be evicted and eat at a soup kitchen run by a local church. He takes readers into a world of shelters, each worse than the one before, save for a refuge run by Harvard students that seems paradise in comparison, but where house rules allow only 90-day stays at a time. Sometimes forced onto the streets, Lough tries begging, discovers an abandoned van to sleep in, and learns that the late shift at Dunkin’ Donuts will allow him to spend the night with his head resting on a corner table.

Lough does a solid job detailing the day-to-day logistics of homelessness: scrounging for work as an underpaid day laborer, struggling to pay for car repairs, depending on the kindness of others. He is less effective, however, in conveying his emotions, offering only occasional hints of mental anguish; instead, he depicts a carry-on mindset that mostly focuses on practicalities. His portrayals of those he meets on the streets are largely superficial, as are his final insights after landing a job that comes with housing.

Still, his memoir is instructive and his advice indisputable: “Consider yourself fortunate,” he writes, “if you can go an entire lifetime and never have to experience the feeling of being homeless.”

Also available in a paperback edition.