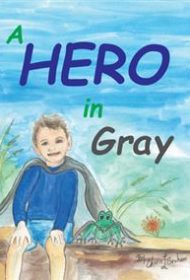 In Cherie L. Braham’s picture book A Hero in Gray, readers meet Grayson, a boy shown playing, helping around the house, asking questions, and performing other activities typical of a seven year old. But Grayon is also dealing with something most other seven year olds aren’t:  He is fighting cancer.

The book’s structure is built around that revelation, with hints throughout that something is a bit different about Grayson. Each page contrasts his normal interests and behavior with a mention that “sometimes he gets very tired!” or “sometimes he feels dizzy!, until it’s finally disclosed that such challenges are caused by Grayson’s cancer and his ongoing treatments. The book’s title is a play on the fact that Grayson is repeatedly called a hero;  the reason is nicely explained over a few pages as the narrative notes that Grayson, like other heros, has to be brave, and strong, and trust in the people around him.

This is a powerful message, hampered by a few flaws in the story’s presentation. The illustrations have the unpolished feel of a child’s drawings; more professional art would have enhanced the project. Additionally words are sometimes inappropriately capitalized. And the book ends with references to God and His “Angels,” a message some readers might embrace more than others. Finally, there’s little explanation of what cancer is, or the process of chemotherapy (but perhaps too much detail would have detracted from the book’s main strength: explaining to young children what life is like for kids with cancer).

Despite such issues, this is a moving story that hits the right notes when describing Grayson’s daily challenges. While it’s apparent that A Hero in Gray began as a very personal project revolving around one family, other children suffering from cancer and their friends and family will easily relate to Grayon’s story. Overall, A Hero in Gray does an excellent job of helping children put a face to the idea of living with cancer.