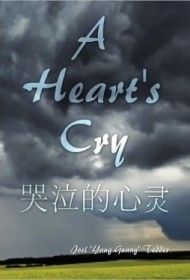 Feeling blue about your life? Pick up a copy of Joel “Yang Guang” Tedder’s A Heart’s Cry. It’s a case of perspective by sledgehammer, as Tedder lays bare a life defined by unrelenting tragedy.

Now 57, Tedder recounts a childhood marked by repeated abuse, first at the hands of his birth father, and later by a policeman stepfather who verbally abused him and beat him with a studded belt well into adolescence. Young Tedder was a star football player on the field, but at home he was a whipping boy, tormented while his mother and younger sister watched helplessly.

Tedder went on to marry, yet a fall from a ladder rendered him unable to sexually satisfy his wife, leaving her wanting someone more virile. A 10-year relationship with another woman ended with her infidelities. Then there was the tragedy of his childhood best friend, who married and had beautiful twin daughters. One night as the family returned home from dinner, intruders shot each member in the head. Tedder’s buddy survived long enough to be held in the author’s arms before expiring.

A Heart’s Cry reads like a modern melding of the most heinous moments from Charles Dickens. It’s a compelling story, though greatly hampered by stylistic issues. The text includes a plethora of grammar and syntax errors. In addition, we never learn where these childhood events took place, and there is a curious boilerplate disclaimer in the front about this book being a work of fiction.

That’s not likely. Even awkwardly presented, the emotions displayed in this story are so raw they can only be true. What keeps Tedder from slipping into an abyss of self-pity, and what will keep readers from feeling oppressed by his story, is his outlook. He came through the storm of tragedy with a sense of optimism that is simultaneously miraculous and inspiring.