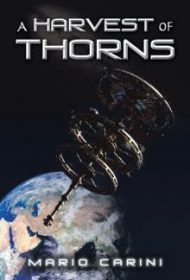 Mario Carini’s science fiction novel A Harvest of Thorns is a futuristic tale of two worlds with intertwined destinies.

In this story, Earth is mired in corporate oligarchy. Meanwhile, Aquario Prime is an expatriate planet trying to forge a new path but struggling against insurgent forces known as the Independence Army Movement (IAM). Their fates collide when Earth’s population is threatened by a deadly epidemic tracing back to Pfeltzer, a corrupt pharmaceutical company that’s trying to infiltrate Aquario Prime’s markets. Simultaneously, IAM launches a series of political assassinations and political intrigues.

Carini’s best passages are vignettes that show his facility with dialogue and economical character-building: scenes of individuals infected with the virus (a la Stephen King’s The Stand), mundane conversations between terrorists, backroom political deals. In one standalone chapter, we meet George, who wakes from a memory lapse to discover he’s killed his wife after being prescribed numerous drugs. In another scene, we see Ruth, an IAM operative, dole out lethal justice to a major character for reasons that turn out to be far more personal than political.

However, A Harvest of Thorns is never as great as the sum of its parts. George’s chapter marks his only appearance, and Ruth’s revenge motives aren’t foreshadowed; indeed, all relevant backstories are shoehorned into a final leg of the book dubbed “What Went On Before,” turning a would-be epilogue into an ad hoc prequel.

Throughout, Carini’s writing is hindered by several factors. Although the story takes place hundreds of years in the future, characters still use Facebook, drive Toyota Corollas, and watch CNN. The IAM’s motives are not fleshed out. And the central plot point— that the virus is a manmade terrorist attack— is immediately suspected but evidently never investigated.

This is an ambitious work with nested subplots and dozens of characters. Carini demonstrates a knack for crafting characters and dialogue. But the story gets away from the author and, consequently, fails to leave a lasting impression.