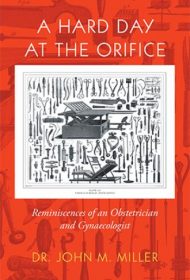 By his estimate, Dr. John Miller delivered between 15,000 and 17,000 babies during his career. In addition, he was a noted educator and hospital administrator in his native Australia and around the world. “Medicine is worthwhile; to me, everything else is stamp collecting,” he writes in his memoir.

A Hard Day at the Orifice—the wink-and-a-nudge title gives a clue to Miller’s approach—looks primarily at the author’s career. His personal life is kept largely in the background as he describes the challenges and rewards of being a medical student, gynecologist and obstetrician, starting in the 1950s.

Miller offers numerous anecdotes and asides from his experiences. At one hospital, many of his patients were immigrants raised in postwar Italy and Greece. Malnourished as children, their pelvic outlet was smaller than normal, and delivery options had to be adjusted. Heading a team that answered emergency calls when a new mother was hemorrhaging, Miller was once called to a dingy Liverpool basement where a woman was nearing death. The team stabilized her with an immediate blood transfusion, but because a stretcher wouldn’t fit in the tiny room, they had to carry her out. He’s never forgotten her husband’s words as they left: “We live like rats, don’t we, Doctor?”

The book isn’t strictly chronological (Miller seldom provides exact dates), and some of the job titles mentioned (e.g., physician registrar consultant) could use explanation. The narrative also includes technical jargon — “Ergometrine is more effective than syntocinon in causing the uterus to contract after delivery…”— which may deter readers. But the author leavens it with humor, wit and interesting detours. For example, when the subject of inhaled anesthesia arises, he launches into a short but fascinating history of the topic.

A book this long, with a fair amount of medical argot, can be slow in spots. But A Hard Day at the Orifice does an admirable job of holding a layperson’s attention, a credit to an interesting, accomplished man.