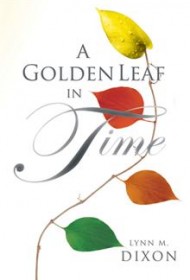 When life gives you lemons, you should read Og Mandino’s classic The Greatest Salesman in the World. It sure works wonders for star-crossed lovers Phoenix and Trey in this self-help-laden romance.

Phoenix is far from home and family, her job a dead end and her relationship over. She’s self-medicating with beer, radio gospel and lots of inspirational books. Trey’s girlfriend is manipulating him to stay in a relationship he’s outgrown, going so far as to attempt suicide when it looks like he’s going to bail, a move that lets a rival edge him out
for a promotion at work. He’s also hitting the self-help literature on a regular basis. Will Trey and Phoenix find each other and realize they can consolidate their libraries since they have so many books in common?

A Golden Leaf in Time has a sweet premise. It’s clear these two will connect at some point, but the plot takes many turns before it happens. By then, we’re hopeful for a sane and healthy romance for them both.

The writing is unfortunately awkward and the wrong words are used on many occasions (“grant it” instead of “granted” and “anecdote” for “antidote,” for example). This head-scratching sentence is typical of many in the novel: “She brought it up during the years as the quencher when the battles were deeply engrossed.”

Another unsettling aspect of the story is that one gay character is presented in a crude caricature that’s out of tune with the novel’s present-day setting. The book is Christian in focus, but very quick to blame this character for what reads as a consensual act in Trey’s past. Readers will wish Trey had taken a little responsibility for his own actions. Even better, the author might have left the subplot out altogether, as it’s clunky and distracting.

The storyline in general is worth preserving, but a thorough edit is needed for A Golden Leaf in Time to catch flight.