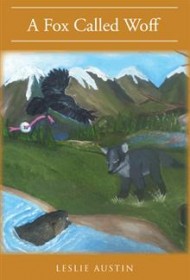 Leslie Austin’s A Fox Called Woff is a tween novel suited for an audience of fifth, sixth and, possibly, seventh graders.

The main character, Woff, is a young male fox who gets separated from his family during a lynx attack and who must subsequently learn to survive in the wilderness. Before Woff is reunited with his family, he eludes and outwits a host of predators and implements a brave rescue attempt for animals in a city zoo.

During his journeys, Woff makes numerous friends, including a beaver, a young female fox, and a wolf with outstanding integrity. Austin anthropomorphizes most of these woodland characters, and the good ones unite to defeat the forces of evil, represented by the vicious wolf, Konk, and his voracious pack of followers.

Although A Fox Called Woff is well plotted, the thematic discrepancies in the novel are worrisome and strain the reader’s suspension of disbelief. Many of the animals express a largely Christian and pacific view. For instance the wolf, Colby, believes in “showing compassion, even to your worst enemy, and treating others like you want to treated.” Colby, like any predator, however, must hunt to survive and does not hesitate to kill for his dinner. The same is true of the fox, Jewl, who eats mice and frogs and yet wishes all of the earth’s inhabitants could “co-exist in a peaceful, harmonious life.” The problem here is that the author, in his attempt to overlay a naturalistic approach to nature’s food chain with a Christian philosophy, creates a worldview with elements that don’t always mesh.

Austin’s book is also marred by severe tense agreement problems and numerous sentence fragments and run-ons. Consequently, even though the author shows some expertise in the plotting of his novel, the book requires serious revisions before the work would appeal to most tween readers.