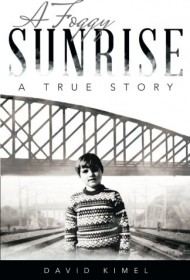 David Kimel was born in Bucharest, Romania, in 1934 to poor but loving Jewish parents. Like most children of his ilk, he lived a relatively carefree life surrounded by playmates and relatives. Then came the war. His memoir, A Foggy Sunrise, details his life, including the terrible events of WWII and its aftermath.

Kimel’s parents concealed their Judaism as the right-wing anti-Semitic Iron Guard launched a reign of terror in Bucharest, where they “hung Jews on hooks” in the slaughterhouse “and posted placards on their necks with the inscription ‘Kosher Meat.’” The family’s deception went undiscovered, and they survived, unlike the estimated 270,000 Romanian Jews killed during the Holocaust.

As a child, Kimel experienced much of the war from the relative safety of bomb shelters, which could account for the lack of immediacy in his book. While there are poignant moments, as when he visits a classmate mortally wounded by shrapnel, they are few and far between. Most anecdotes meander and, as such, lose some of their power.

Too many insignificant characters are included — and described in ungrammatical detail. Describing a neighbor, Kimel writes that “his thin moustache looked like it was painted over his upper lip, which was painful in contrast to his unmovable right eye always covered with a glassy imitation.”

First-person descriptions are often overwritten: “I was enveloped in a kind of emotion that grew like a swelling in my neck, choking me — and through tears that seemed frozen, glued to my eyelids, I started to see foggy fragments of my childhood…”

Kimel expresses the hope that his shared memories of his parents will extend their lives beyond the grave, giving their descendants a blueprint to follow in theirs. On this note, he definitely succeeds. In terms of writing a work accessible to general readers, however, the book is less effective. Readers beyond the author’s family will find promising material here that would engage more completely with healthy revision.