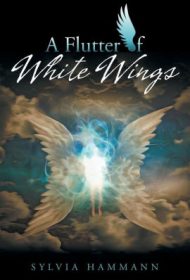 Identified as a thriller on the back cover, Sylvia Hammann’s A Flutter of White Wings is more of a tame supernatural mystery.

Set in Australia, the story begins with Julie returning to the home of her former in-laws in Marickville, after moving away following her husband’s death. Julie is pregnant with the child of Dale, her second husband, whose dead wife haunts her. When Dale also dies unexpectedly, Julie becomes haunted by his ghost as well. Julie then falls in love with Dale’s good friend, Jason, with whom she has two children.

Despite her best efforts to stay away from the ghosts she’s encountered, she and Jason sense the spirits calling for their return. The mystery involves the reason for the ghosts’ unrelenting hauntings.

Unfortunately, writing problems plague this book. In addition to grammatical and punctuation errors, the book contains needless repetition, awkward foreshadowing, and excessive details that slow the pacing and reduce suspense. For example, the story includes repeated references to drinking coffee, eating, and going to the bathroom: “Jason wanted to know what had taken them so long. Alice said she’d had to go to the toilet and they’d stopped for coffee.”

The ghosts appear as benign visions or soft whispers, rather than something truly frightening. In addition, the book includes far too many characters whose names begin with the same letter. There’s Jack, Jason, Jeff, Jimmy, Johnny, Dale, Dan, Dave, and David, among many others. Multiple names are often packed into one jumbled sentence. “Julie told Edward to tell Alice and Thomas to come and have breakfast after Jason received his coffee”; “The kitchen was occupied with contractors cooking breakfast, but Jason, Jack, and Jeff managed to squeeze in to make a coffee.”

In the end, the story’s payoff simply can’t overcome the distraction of unneeded characters and details. Edited for style and content, this book could achieve its goal in about half the length.