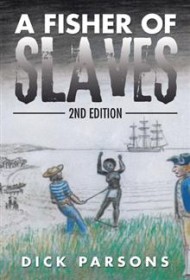 In this historical novel, Dick Parsons takes readers on a revealing and disturbing journey aboard a slave ship. Seen through the eyes of young apprentice seaman Nathaniel, his mother Elizabeth—an ardent abolitionist—and the slaver’s Captain James Youle, the story believably portrays in brutal detail a woeful era in American history.

At the outset, Nathaniel wants to follow his late father in a naval career, but Elizabeth resists because her husband was killed in a naval battle. Captain Youle eventually persuades her that he’ll take good care of the boy, and soon he’s underway from the English port of Bristol on a journey that would take the Mary Ann to the African Slave Coast, the New World and back to Bristol.

A retired British commanding naval officer, Parsons describes—with the near-deftness of Patrick O’Brian in his Aubrey–Maturin nautical novels—the travails of sailing a ship across the Atlantic with some eight score, miserable slaves crammed into its filthy, putrid hold. Overlaying the nautical tale is Elizabeth’s determined efforts to do what’s possible to fight this abomination, despite the personal anguish she feels because her own son is a participant in that industry — and despite her ironic, growing affection for the slaver’s captain.

The switching viewpoints between the three main protagonists take some acclimation. And the book opens with what feels like a contrivance: How, readers will wonder, can a dedicated abolitionist allow her 13-year-old son to apprentice aboard a slave ship without asking what cargo the Mary Ann will carry?

But these are minor flaws. Parson’s characters are nuanced and credible, unlike the cutouts found in historical novels that focus more on the action than the players. The author has a keen ear for dialect, but doesn’t overdo it so that it becomes distracting, and the writing is crisp and readable, moving at a steady pace. Once past the initial hurdle, it’s smooth sailing for anyone who appreciates a good yarn.