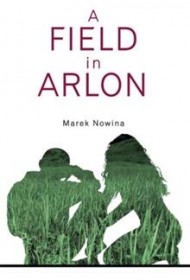 Melly Cheval is restless. Despite a conventional life, with a wife, money, job and friends, he struggles with the label of “middle-aged.” “The hair gone he still wore a gold stud on his left lobe, just to warn people he was unconventional. He yearned to remain a player even though most of his contemporaries had withdrawn from the game.’’

In a somewhat last-ditch effort to find meaning in his life, he journeys to the site of the upcoming solar eclipse in Arlon in Luxembourg, with a stop to “do Amsterdam” along the way. Trying to regain his youth, he walks the streets, smoking dope, counting his pennies on a faux budget, and becoming obsessed with rehabilitating a prostitute named Talish, whom he encounters but doesn’t sleep with. He returns to London and writes a short story about his alleged attempt to save Talish, becoming so consumed with his own tale that he has to return to Amsterdam to find her and finish the story.

A Field in Arlon is a compellingly written novel. Despite the quirky nature of the book, Marek Nowina has captured the quest for the middle-aged desire for “something.” In Melly’s words, “He didn’t know what that something was but he was sure he hadn’t found it. Every time he ventured out he’d return despondent, disillusioned, and unfulfilled. He needed a challenge, like being dumped in the middle of nowhere, penniless, and having to find his way home. He needed a direction; he needed a purpose.”

Melly’s confusion and guilt over his “cushy “ life, his desire to make sense of his obsession with Talish, are well-drawn; his descent onto the mean streets of Amsterdam, provocative.

Where does his journey end? This is the kind of book that will give readers plenty of fodder for discussion about what it means to gracefully — or not so gracefully — find acceptance of middle age.