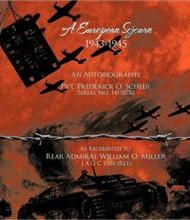 Frederick Scheer’s story of his WWII experiences started as a conversation during coffee before a Kiwanis meeting. His friend Dusty (William O. Miller) encouraged him to write those experiences down. The result keeps the flavor and informality of a story told over a cup of coffee, while adding so much more.

Many war autobiographies are of heroism and battle. Scheer’s has more of an everyman quality; it’s the story of a callow Georgia farm boy who was simply doing his duty and trying to get out alive. In Scheer’s case, the Army made him an infantryman, and, shortly after he landed in Normandy, the Germans made him a prisoner. It’s his detail-rich reminiscences of his time as a POW that provides the most interest for this story.

Scheer describes his captors as humane and lenient, and his relationship with them as “amiable.” Although he was Jewish, and although Jews were forbidden to do war work, that rule didn’t apply to Scheer. Assigned to a work crew that maintained rail lines, Scheer and his fellow POWs engaged in petty sabotage whenever they could, and stole coal and food opportunistically— and with the Germans turning a blind eye. Being a POW was “…just like being in the army — the German army.” The POWs were even paid for their work.

Readers interested in the patterns of everyday life for the common soldier will find particular pleasure with Scheer’s unpretentious narrative. With its eye for detail and clear, conversational approach, A European Sojourn is a welcome addition to the history of WW II.