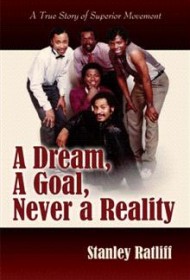 Author Stanley Ratliff tells a tale that’s familiar to thousands of musicians since the dawn of rock and R&B music. His book, A Dream, a Goal, Never a Reality, is about how a group of artists struggled mightily for stardom but inevitably fell short of the brass ring.

Ratliff was a member of an up-and-coming Chicago soul group, Superior Movement, which was formed by high school friends in the 1970s. Starting with school talent contests and bar gigs, the group graduated to nightclubs, local showcase gigs and regional tours.

Maybe Superior Movement deserved stardom. Maybe they got the shaft from unscrupulous managers. Maybe their label, when they finally signed a record deal, jerked them around and recruited mystery singers to sing in place of group members.

Maybe all these things were true, but in this slim memoir, Ratliff doesn’t make a compelling case for a story of lost fame. Rather, his narrative is about squandered fame, thanks to the band members’ naiveté and personal weaknesses, including egos that lead to members’ departures, lousy managers, and, eventually, involvement with drugs. The litany of setbacks is so common that it lacks drama.

Ratliff unveils the narrative in a conversational, matter-of-fact voice, as if telling a cautionary tale to the next generation of wannabe stars. He’s a likable narrator: “Believe it or not, here we were again!” he writes about their second shot at a record deal. “You’re probably saying to yourself, what the heck is going on? Believe it! We were saying this too.” Unfortunately, he isn’t a storyteller who can make readers hang on every turn in the band’s fortunes. The text is plainspoken, rather than artful, resulting in an avuncular memoir that lacks the greater insights that would give the story power and poignancy.

Unless you grew up in Chicago in the ‘70s and ‘80s and always wondered whatever happened to Superior Movement, this memoir, sadly, isn’t likely to resonate.