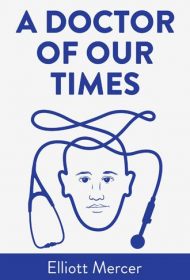 Elliott Mercer’s brief novel A Doctor of Our Times, concerns a young man embarking on his medical career who eventually questions his initial desires and commitment to the profession.

Through a third-person narrative, readers meet Nolan Burkett, a California medical student en route to fulfilling his childhood dreams. Training and rotations ultimately bring him to a surgical specialty at Charity Hospital in New Orleans, where he hones his skills.

Nolan develops a relationship with an ICU nurse, and six years later the newly married couple relocate to the cultural hub-bub of Chicago. As they start a family, each begins to reflect on their monetary gains but lessening satisfaction. When tragedy strikes, the aftermath causes Nolan to make several questionable choices, including infidelity and consequential business ventures, that force him to re-evaluate his original goals and aspirations.

Throughout, italicized passages reflect the couple’s inner thoughts, which often seem superfluous. For example, at one point the narrative describes an “exhausted but exhilarated surgical team” In the italicized part immediately following, Nolan reflects on the scene: “It was a combination of physical and mental exhaustion, mixed with exhilaration…”

Additionally, chapters often fluctuate between the story’s human interest aspects and academic-like diatribes detailing such issues as Thoracic surgery, hospital rotations, or Chicago history. The mix is unsettling and impedes the story’s flow.

As a retired interventional and neuro-radiologist himself, Mercer adds an unconventional twist to this work by writing a first-person addendum. Here, he reflects on choosing a medical career in present times, female physicians, the American Medical Association’s disregard for underserved communities, and more. Footnotes throughout the book provide additional commentary on his professional experiences. Both feel out of place in a novel and distract from the story.

This is an unusual blend of fiction highlighted by an insider’s nonfiction perspective. Unfortunately, this hybrid approach doesn’t serve the novel well and isn’t likely to appeal to nonfiction readers. Revision is required to attract a general audience.