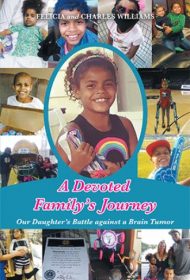 Indiana couple Felicia and Charles Williams’ lives were turned upside down when their eight-year-old daughter Kariina was diagnosed with Stage 4 brain cancer in 2019. In this slim book, Felicia details what took place that traumatic year.

Kariina’s symptoms were headaches, sleepiness, and loss of balance. The first two doctors consulted gave Kariina antibiotics. When the symptoms worsened, a different doctor diagnosed a sinus infection, but Felicia knew that wasn’t the problem; she insisted on a CT scan. When the results came in, the doctor praised Felicia’s mother’s intuition while delivering terrible news: “There is a golf ball-size tumor in your daughter’s cerebellum, at the back of her brain.”

He sent them to a children’s hospital three hours away, where Karriina underwent 10-1/2 hours of surgery. When she awoke, she couldn’t move, speak, or eat. The tumor was cancerous, and chemotherapy and radiation were scheduled. Therapists would also be needed to help her regain functions lost from the tumor’s removal. Felicia struggled to tell Kariina what was going to happen: “I just couldn’t hold it together,” Felicia writes. “I cried all day and night.”

But the story ends on an upbeat note, eight months out from chemotherapy. Kariina still sees “balance and neurological therapists,” but Felicia is optimistic of the outcome, stating of Kariina: “She is a fighter, a warrior and a champion.”

The narrative is only 24 pages, double-spaced—skimpier than many magazine articles. It’s written in a simple, straightforward, style, simply reporting what happened in a chronological style. While heartfelt, there’s little depth or fresh insights, and many readers will wish for more substance.

The text is augmented by black-and-white, darkly reproduced photographs. Some also appear on the front and back covers, where they are shown in color to better effect.

Given its extreme brevity, the story isn’t likely to appeal to general readers. Still, those going through something similar might find solace in the Williams’s story in simply knowing they aren’t alone.