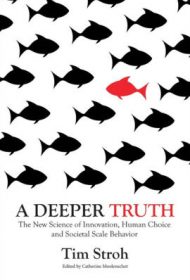 Author Tim Stroh describes his book A Deeper Truth in the subtitle: “The New Science of Innovation, Human Choice and Societal Behavior.” This is an ambitious goal for such a slim volume, but it’s no idle boast. Synthesizing various forms of economic theory with social and evolutionary psychology, Stroh creates a detailed explanation of why humans behave in seemingly irrational ways based on our innate dispositions. Consequently, it becomes easy to see why so many predictive models, whether explaining the success or failure of a new product or popularity of a new policy, are woefully incomplete.

Stroh’s chief strength is not his originality but the diversity of his scholarship. Where many theories have attempted to explain human behavior as generally rational decisions (e.g. to achieve self-preservation or monetary rewards), Stroh brings a sociobiological perspective, drawing from the likes of E.O. Wilson, to explain why humans are hard-wired to act in apparent defiance of narrowly-defined self-interest. He makes similar use of scientific history to examine why paradigms (a la Thomas Kuhn) are often not adopted based on scientific merit, but simply because they don’t threaten individuals of high status associated with earlier paradigms.

Status is at the core of our decision-making, he believes; we are genetically driven to strive for it, but the expression of status is as individualized as humans themselves. Indeed, while Stroh paints a picture of human choice strongly influenced by our common evolution (what he terms “Motivational Drive Theory”), he never reduces humans to their genes, avoiding the problematic idea of biological determinism that has plagued other theorists.

Stroh supplies readers with succinctly stated rules to apply his theory in tangible ways. The most obvious applications are for product developers, marketing specialists, and policy makers, but it will also benefit anyone in a leadership or educational role. A Deeper Truth is thoroughly sourced, highly accessible, and carefully written. It will reward anyone curious about the seeming vagaries of human choice with rich insights.