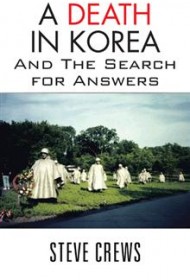 In this intriguing book, Steve Crews turns over stones that have lain undisturbed for more than 50 years as he seeks to unravel a family mystery rooted in the Korean War. Using old-fashioned shoe leather rather than the Internet, Crews digs out official reports and other accounts relating to the July 1952 shooting death of Staff Sergeant Grover Gene McGuire – his father.

The shooting was ruled accidental, but as Crews follows the long paper trail — a quest sparked by some unrelated family research — he unearths inconsistencies and contradictions in the official records, raising the specter of suicide or something more sinister.

The plot thickens as we learn that one of two witnesses at the shooting was another airman, Fred Randall Crews, who two years later married McGuire’s widow and became step-father to her infant son Stevie. Crews notes that no one from either family attended that wedding, something he calls “a little strange,” while admitting there could have been good reasons for their absence.

That typifies the author’s approach: he piles up inconsistent and suspicious elements, ponders them, offers theories but stops short of reaching definitive conclusions. This repeated raising of expectations that go nowhere is initially frustrating for readers, but for Crews, who didn’t know his biological father’s name until age 58, none of that seems to matter: what’s important for him — and what begins to transport readers — is the journey of discovery.

Like his father and stepfather, Crews is a military man who served in Vietnam, the Philippines and South Korea. His knowledge of military protocols and operations lends the book an authenticity that will likely appeal to other military personnel. But this short book (with rather large type) is an easy read, so non-military readers should find the time investment worthwhile as well, and may perhaps develop their own theories about what really happened in Korea all those years ago.