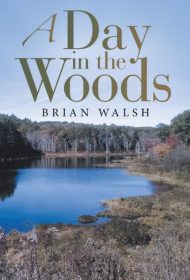 When a young South African man heads to Europe for a travel adventure, he finds he’s unprepared for the reality that awaits him in Brian Walsh’s A Day in the Woods.

In March 1976, the early-20-something Brian lands in Frankfurt, Germany, ready to explore the world and hoping to emulate the characters in James Michener’s The Drifters. But when he steps outside the airport and realizes it’s unexpectedly cold, it’s clear Brian hasn’t done his homework and knows little about the world he plans to explore.

Carrying the U.S. equivalent of $2,000, he knows he’ll need to find work soon but doesn’t know that he can’t get a job without a work permit. He does secure work with some shady characters who prey on local GIs, but those dealings land him in trouble and he’s soon on the road again, this time to Austria and beyond. He makes various friends, discovers both the generosity and deceit of strangers, and ultimately experiences the adventure he’d sought.

Brian’s journey is compelling, though the narrative reads more like memoir than fiction; the story is driven by the author’s travels rather than a structured plot. The protagonist is likeable and the people he meets throughout colorful. Readers may puzzle at Brian’s lack of preparedness, but the book is set more than four decades ago when the Internet was little but a futuristic imagining.

The author’s overuse of adjectives in attributing quotes (“he valiantly said,” “Mandy boldly said,” “he said cackling,” etc.) is distracting. And there are some jarring moments, such as when Brian finds his generally healthy friend crying and leaps to the conclusion that, perhaps, “some awful disease had stricken her.” Or when his friend suddenly grows inexplicably shy, even rude, around Brian’s father with no real explanation for the sudden change in character.

Such issues don’t dramatically impact reader enjoyment, however. Overall, this is a satisfying story likely to appeal to a wide range of readers.