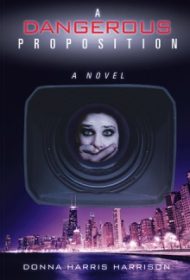 In this timely novel on sexual abuse and power-hungry men, a female television producer must decide whether to protect her career and her integrity or risk it all to stand up to the old boys’ network.

Julianne Sloan oversees Chicago Sizzle, a weekly TV news magazine. When she decides to do a story on Horizons, a new battered women’s shelter that was the cause celebre of four socialites, her bosses applaud her for an excellent public relations move. Then Julianne meets Clint Andrews, the oh-so-charming Horizons director, who isn’t what he seems, and her story becomes an exposé—against the wishes of her boss Ted Marshall.  When Marshall resorts to intimidating Julianne, she must decide whether to play the game, out-maneuver the players—or resign.

The book is certainly on target in today’s climate. One of the more telling points is how women sabotage themselves; Julianne’s female mentor at the station, Pam Avery, refuses to back her up in her defiant stance. Pam tells her that it’s one thing to try to bring down Andrews, it’s another to try to take down her own boss: “Who’s going to punish him, all the others who’ve been doing exactly what he was caught doing from the time they stepped into their first jobs?”

That said, however, the author tends to be a little heavy-handed when it comes to Julianne’s nightmarish relationships: an abusive ex-boyfriend (with whom she briefly re-connects); the slimy Andrews; and a married co-worker with the proverbial bitchy wife. There was potential for a hard-hitting ending, which would have given the book much more impact. Instead, the story concludes like a happily-ever-after TV movie-of-the-week.

The narrative could use some copyediting to correct more than a few typos and missing articles in sentences. Still, as readers are all-too aware, Julianne’s story could be any woman’s story—and the more attention drawn to the issue, the better for women everywhere.