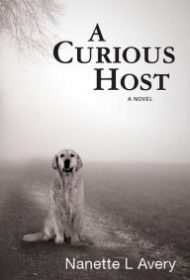 Nanette L. Avery’s A Curious Host is a wise and penetrating novel about intertwining lives in a small town.

Strangely at first, the figure tying the story’s multiple strands together is that of a runaway yellow dog scrounging for scraps and buried treasure through the streets, back alleys and open spaces of what the author describes simply as “the plain town.” Gradually as it wanders, running into a host of citizens and the establishments they frequent, the animal’s role comes clear: Through its travels, we are introduced to a range of stories that give the town and its residents dimension.

Among them are the waitresses at the diner; one changes her first name according to her morning whim, the other is a young runaway who sleeps in her car. Then there is the widowed biologist who specializes in rare viruses, the self-ordained evangelical preacher and the woman whose life revolves around smoking, drinking and winning at poker. Assembling such characters creates a vibrance beneath the plainness, giving the town and its people unexpected resonance.  And then there are the deaths: The yellow dog is involved with them too.

Slowly, deliberately the author moves these mysterious losses toward center stage and  the connections between them are forged.  They are molded by a series of pithy and succinct characterizations (“Gil Adler wasn’t always a drunk, and he wasn’t always a bum, But he was always pitiful”) and place (“The mood of the plain town is like a string of pearls, some days more lustrous than others”).

With unexpected flashes of both humor and pathos, the novel is told with considerable verve and, despite its complexity, never loses its focus as a rich evocation of a small town and, finally most memorably, of the human condition. As the author so eloquently writes: “Life’s fragile bridge leads in only one direction, and with every step taken a little of its path wears away until one day it disappears.”