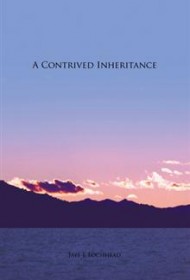 Jaye E Lochhead’s novel A Contrived Inheritance is about a woman named Maggie Stewart whose rich husband dies of leukemia. After inheriting his vast wealth, she decides to move to a new town, assume a different identity and start all over.

The novel takes place largely during the year after her husband’s death. Through a series of flashbacks, as Maggie ruminates about her old life, the reader learns of her past and why she would choose to leave her identity behind. But there is no clear, believable explanation for Maggie’s decision to change her name and cut off contact with her family and friends. It’s equally puzzling when she later decides to reconnect with her family and give up the false moniker.

Much of the plot is driven by coincidence: two characters show up in the same place by chance, for example, or unknowingly move into houses next door to each other. The characters often exclaim how they can’t believe such amazing coincidences, things that usually occur only in the movies, are happening to them – which is exactly how readers will feel about these contrivances. In addition, the novel too often uses the passive voice, is riddled with distracting grammatical errors, and features dialogue that is too often stiff and unrealistic.

The premise of Lochhead’s novel is interesting. Compelling things happen to the characters, and even with her dubious motivations, Maggie remains an interesting protagonist. But the repeated chance occurrences and the shortcomings in writing style keep A Contrived Inheritance from being the interesting, engaging read it might have been.