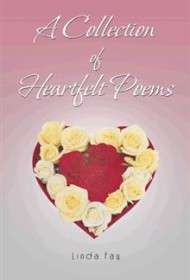 Linda Fay’s poetry, often religious in nature, comes from a place of warmth, genuine caring and faith. She offers homilies, tributes, and words of encouragement, presenting a steady, positive worldview, while acknowledging tribulations.

In “And Above All, Persevere…,” she advises: “Perseverance and endurance are tools for the fight…” but also emphasizes that we are lost without God’s assistance. She extols the virtues of mother, grandmother, colleagues, friends, with joy and admiration. For example, In “Kindred Spirits” she writes of meeting a stranger who intimidates her at first: “But then she smiled at me, and the warmth of it touched me.” While most of her poems are religious, there are secular ones, as well, such as, “Please…A Little Luck.” and “Pretty Little Dark-Skinned Girl”.

Fay’s strength is her sincerity and ability to effectively bring readers to the heart of the matter. The downside is that she often references Biblical rhetoric. Rather than describing experience in original language, she resorts to religious abstractions that have little resonance. In “Family Bonds,” a poem about a feud resulting in wounded feelings, she writes that “God admonishes that we love one another.” This may be true, but Fay’s strategy of giving us God’s solution to an ordeal, without providing attendant elucidating details, feels unsatisfying.

Fay sometimes utilizes image-driven verse, but too often it’s prosaic gloss, rather than a distilled, evocative narrative. Essentially, she’s telling us how to feel about something, rather than letting us come to such conclusions on our own. Without a doubt, the author knows how to communicate clearly, but her use of language lacks depth and freshness. While religious readers may find some interest here, if the author can learn to push past the comfortable and cerebral, her poetry will have greater impact overall.