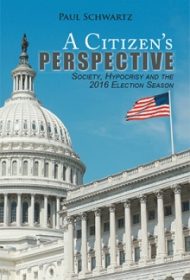 In A Citizen’s Perspective, columnist Paul Schwartz collects a series of articles he wrote during the 2016 election season and its aftermath.

Schwartz writes for the Montgomery County Sentinel, a local newspaper in Montgomery County, Maryland. He groups his columns into topics ranging from recent Supreme Court decisions to the 2016 campaign (both regionally and nationally) and urgent social issues (such as gun violence and climate change).

Schwartz writes from an insightful, if decidedly progressive, perspective. In his introduction, he acknowledges that “some prognostication[s were]….more accurate than others.”

The author’s writing is strongest when he connects local and national issues, particularly those that resonate beyond the 2016 election. For example, in one column he connects a regional issue regarding high-school surveillance technology to national issues such as an Amtrak derailment and securing embassies on foreign soil. Here, he illuminates how both local and federal governments tend to be reactive rather than proactive.

The majority of Schwartz’s writing, however, speaks to local issues, such as the lack of affordable housing in Montgomery County or the successes of an area nonprofit, Court Watch Montgomery. His collection also includes multiple interviews with regional politicians. This focus detracts from its potential appeal to a national audience.

Readers of a more conservative bent are likely to be turned off by the author’s politics, particularly his strident tone. For example, he describes attendees at Trump’s inauguration as “sheep being lead to the slaughter” and labels Trump “xenophobic, misogynistic, narcissistic…[and] ignorant.”

The collection also suffers from repetition. (In one case, the author literally includes the same column twice.) There are numerous anti-Trump articles, which in today’s saturated media environment can be exhausting, particularly as the columns included here are no longer current. The same holds true for Schwartz’s diatribes against certain Supreme Court cases such as Citizens United.

Although the collection isn’t likely to appeal to a national audience, residents of Maryland, particularly Montgomery County, may find it a useful resource.