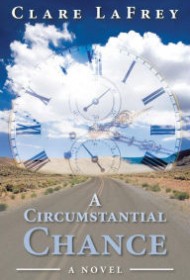 The debut novel A Circumstantial Chance tells the story of a young girl whose dream of a normal childhood is shattered by her dysfunctional mother.

The story is told through the eyes of 9-year-old Rita, a child with adult sensibilities raised by her grandparents until circumstances reunite her with her self-absorbed mother, Coral, a former exotic dancer with a baby boy whose paternal lineage Rita doubts matches her own. Homeless and broke, they spend a night in a bug-infested shelter, then embark on a search for a home. Though Rita doubts that her sometimes-abusive mother is capable of caring for them, she fears foster care more. And so, with Coral’s body as their only currency, they set off in her gas-guzzling wreck of a car to find a man who will take them in.

While a lot happens in A Circumstantial Chance, the writing style makes for a difficult read that weakens the power of the plot. Author Clair LaFrey overuses modifiers, including the repetitive use of “abruptly”  “right then”  and “hastily” (each appears more than 100 times). Misused commas, uneven pacing and redundancies (“I hastily climbed up the plank fence, as fast as I could”) add to the reading challenges, as do misused words, such as:  “he swiftly ambled over to the remaining two horses…” (He can move swiftly, or amble, but not both at the same time.)

Often, the author’s penchant for overwriting makes it hard to pay attention to the story. For example: “Right then, I had no idea what else Paddy wanted from me, and meekly looked back at him, until he abruptly roared out grandly, ‘Well, I still have some chores to do…” Or this:  “Mom gushed girlishly, as she blushed sheepishly…”

A Circumstantial Chance ends with a “sneak peek” at what the author describes as the next book in the “Fateful Consequences Series.” For all of the first book’s weaknesses, Rita and her “walking disaster” of a mother are memorable, well-drawn characters. Proper editing would go a long way toward eliciting the reader empathy that these two deserve.