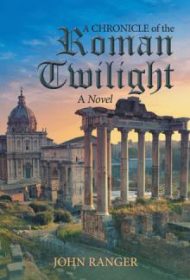 The story is written in the form of a memoir of a man who lived through some of the empire’s most critical events: the battle of Hadrianople, the proclaiming of Christianity as the sole religion, the Visigoths sacking of Rome, etc. It revolves around Marcus Cedranus, a British born man whose troubled relationship with his parents forces him to leave his home at an early age and make a life for himself elsewhere.

Hired as a teamster for a transport company, Cedranus is inevitably drafted into the Roman army, which is woefully undermanned after wars with Germanic tribes and civil wars have depleted its ranks. As a soldier, he quickly rises to prominence. In his extensive travels across Europe, he witnesses the beauty of the region but also the horrific consequences of war. This dichotomy is also apparent in his personal life, which is filled with love and loss.

The novel’s undeniable strength is its meticulous historical detail, including geography, culture, migration of various groups of people, etc. This allows the storyline to feel authentic and immersive. However, it can also can have a textbook-like feel that slows the narrative momentum at times, as in: “The Peloponnese is a mountainous region, though less so than that part of Greece lying to the north of the Gulf of Corinth. Nonetheless, the elevations do reach seven thousand feet in places… ”

That aside, the author’s intimate and insightful portrayal of Cedranus—an endearing everyman—lends the novel an intensity and depth that ties readers emotionally to the unfolding story. That emotional connectivity, coupled with the rich historical detail, creates a story that readers can lose themselves in for hours.