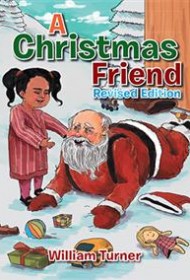 In the picture book A Christmas Friend, William Turner builds on a short Christmas poem he wrote in 1997 to tell the story of Santa Claus, a girl named Sydney, and her visit to see Mikea, a lonely girl living in the North Land.

Turner’s poem, The Night Santa Fell-off the Roof, tells the story of Santa slipping off a roof on Christmas Eve and Sydney nursing him with hot cocoa and pie until he feels well enough to continue delivering presents. The two-page poem is a cute little tale in itself, ending with: “She thought—as the sleigh rose into the heaven,/That she would never forget that Christmas of 1997[sic]”.

The bulk of A Christmas Friend is a kind of prose sequel to this poem, as Mikea, a four-year-old girl, writes a letter to Santa Claus asking for a friend. Mrs. Claus suggests that four-year-old Sydney might be the perfect person to help fulfill Mikea’s wish, and soon Santa is tapping on Sydney’s window to ask if she’ll come with him to pay a visit to Mikea in the North Land. Sydney obliges, and she and Mikea become fast friends.

A Christmas Friend is an enjoyable, well-told story. Turner gives Santa’s reindeer — as well as Mikea’s dogs Jack and Buck — colorful personalities, and all of the characters are likeable. What flaws exist, such as the strange presence of a hyphen in the title of the poem, or the believability of a four-year-old writing perfect, page-long letters, are easily forgiven in the context of the greater narrative.

The pages are overly text-heavy for a standard picture book (while the book is divided into chapters, it has the appearance of a picture book). And the art is somewhat generic, but it’s expressive and helpful in moving the plot along. Overall, Turner has succeeded in turning a poem meant for one girl into a Christmas story enjoyable for all.