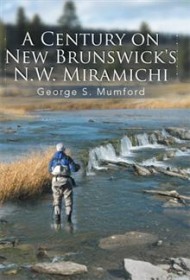 History can sometimes best be reflected by remaining in one place and recording the ways it changes over time. A Century on New Brunswick’s N.W. Miramichi does just that, thanks to three generations of a family that spent vacations at the same hunting camps.

Author George S. Mumford begins with recollections from his father’s journals, written during a trip to the Miramichi River in the summer of 1916. At that time, reaching the camp was a matter of train travel, followed by a horse-drawn wagon ride into the deep woods for hunting and fishing.

Mumford then describes his first trip in as a child, and intersperses history with more recent visits, when his grandkids are the ones fishing. Over time, roads are built and the camps even get flush toilets, but these are primarily stories of “roughing it,” albeit with paid guides and a camp chef in the modern era.

Mumford captures the humor of fellow campers, along with his youthful apprehension while watching hunters set a bear trap. His observations as the area around the camp is sprayed with DDT, leading to a die-off of the historically plentiful salmon, illustrate the ways that hunters and fishermen can be powerful stewards of the environment; their logs were the first to record the changes, after which a Miramichi Salmon Association began more focused activism.

While this is a thoughtful history, it’s also entertaining. Over the course of a century, many people pass away, but the family continues to make the journey as often as possible, recording the daily fish tally and any wildlife sightings, and it’s easy to fall into the relaxed rhythms of such a vacation. There’s an index for easy reference, which will be a boon to historians.

Century is not only a valuable record of a place over time, but also highly enjoyable reading.